COVER REVEAL TIME FOR MY LONGTIME CRITIQUE PARTNER, PAT ESDEN, & HER NOVEL, A HOLD ON ME!!!

I am so excited to be posting this. You all know those readers. The ones who've read your early words, your later words, your late night musings, your angsty e-mails. My friend, Patty, has been that for me. She's helped me grow as a writer and never shirked away from hard truths.

So it goes without saying that I'm absolutely THRILLED to share this moment with her! Cover Reveal! For her debut new adult novel, A HOLD ON ME!!! BE SURE AND READ THE BLURB BELOW, HIT YOUR PRE-ORDER LINKS, AND CHECK OUT THE CONTEST LISTED!!! 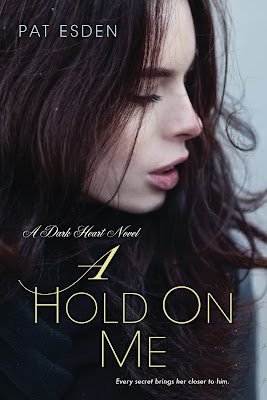 She never wanted to return.
He wants nothing more than for her to leave.
But the fire between them is as strong as the past that haunts them.

Annie Freemont grew up on the road, immersed in the romance of rare things, cultivating an eye for artifacts and a spirit for bargaining. It’s a freewheeling life she loves and plans to continue—until her dad is diagnosed with dementia. His illness forces them to return to Moonhill, their ancestral home on the coast of Maine—and to the family they left behind fifteen years ago, after Annie’s mother died in a suspicious accident.

Once at Moonhill, Annie is shocked when her aunt separates her from her father. The next time Annie sees him, he’s a bizarre, violent shadow of his former self. Confused, she turns to an unlikely ally for support—Chase, the dangerously seductive young groundskeeper. With his dark good looks and powerful presence, Chase has an air of mystery that Annie is irresistibly drawn to. But she also senses that behind his penetrating eyes are secrets she can’t even begin to imagine. Secrets that hold the key to the past, to Annie’s own longings—and to all of their futures. Now, to unlock them, she’ll have to face her greatest fears and embrace her legacy… 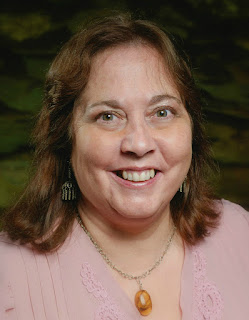 PAT ESDEN would love to say she spent her childhood in intellectual pursuits. The truth is she was fonder of exploring abandoned houses and old cemeteries. When not out on her own adventures, she can be found in her northern Vermont home writing stories about brave, smart women and the men who capture their hearts. An antique-dealing florist by trade, she’s also a member of Science Fiction & Fantasy Writers of America, Romance Writers of America, and the League of Vermont Writers. Her short stories have appeared in a number of publications, including Orson Scott Card’s Intergalactic Medicine Show, the Mythopoeic Society’s Mythic Circle literary magazine, and George H. Scither’s anthology Cat Tales.

Check out the fantastic giveaway on Pat’s Facebook page. Chances to win an Alex and Ani Path Of Life Heart Charm Bangle, or Amazon gift certificates.  Easy to enter! https://www.facebook.com/PatEsdenAuthor

WEBSITE: http://patesden.com
Posted by Jaye Robin Brown at 7:00 AM 3 comments: