I'm so excited to have Liz Czukas on the blog today for the 2014 Contemporary Scavenger Hunt. Liz is the author of not one, but two contemporary novels published by Harper Teen! ASK AGAIN LATER and TOP TEN CLUES YOU'RE CLUELESS (coming December 2014). And if you read down, you'll find out the pretty amazing prize you might win! 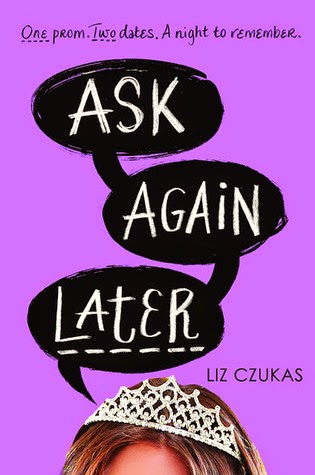 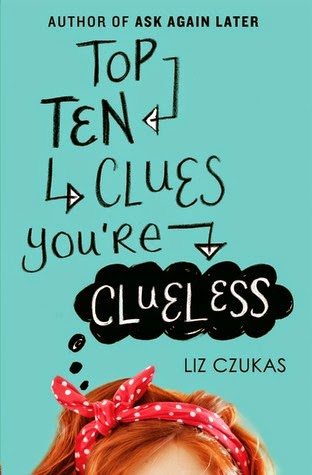 What made you decide to write YA?

I have been a fan of YA since I was probably too young to be reading some of it—hello, Judy Blume’s Forever!  When i took my first steps into writing, it was just a natural fit for me.  I like how everything in YA has an intensity and importance to the characters.  There aren’t too many adult characters out there worried about if they’re any good at kissing, you know?  It’s just more honest and fun to me.  Plus, I think there are so many exciting things going on in the YA category—great stories that aren’t being told anywhere else.

What is your favorite scene from Ask Again Later? (I know mine is one that involves two characters in the trunk of a car.  :) )

Yes indeed—the trunk seems to be a universal favorite!  I had so much fun writing that scene and it was such a relief to finally let it happen, you know?  (I can’t say more than that, or I’ll spoil it!)

Describe Top Ten Clues You’re Clueless in 140 characters or less!
6 teens, 8 hours in a grocery store, $10,000, Christmas Eve. Theft, romance in the dairy dept, hijinks, kissing, and a ham that gets around.

You write both young adult and new adult.  How is it different writing each?
For me, they two are kind of similar. Both have characters who don’t quite have themselves figured out yet, and tend to be a little more awkward than actual adults in books.  Both tend to be a very personal, intimate narrative.  The differences are more in the situations they confront.  Also, NA characters just have that little bit more life experience and a lot more freedom than YA characters.  And while I am not opposed to sexual relationships in YA, they tend to be hinted it, while NA characters can have those relationships on the page.

Do you have any must haves while you are writing?

Just my laptop!  I’m not one of those writers with a lot of rituals.  I can write anywhere and often do!

What are some authors that inspired your writing?
Oh wow, that’s a tough one!  I adore e.lockhart, Maureen Johnson, and Stephanie Perkins for smart, realistic characters you cheer for all the way.  But there are so many amazing contemporary writers out there—Gayle Forman, Jandy Nelson, Sarah Zarr, Sarah Mlynowski, Jay Asher, Morgan Matson, Shaun Hutchinson…I could go on all day!

Can you tell us anything about what you are currently working on?
Right now I’m working on another NA romance though I’m not really able to talk about that yet!  I’ve also got another YA out in search of a home that is all about losing something precious to you and facing an uncertain future—but it’s funny and fun, I swear!

Thanks so much Liz! And readers, Liz is giving away a signed ARC of Top Ten Clues You're Clueless! (US Only Please!) - Just enter the Rafflecopter and you're good to go!

a Rafflecopter giveaway
Posted by Jaye Robin Brown at 12:00 AM No comments:

Bam! You're here because you are a dedicated reader of YA fiction and are in search of great new reads! Right? Right! So let's not dilly dally - if you're not familiar with the Hunt - then pop over HERE for all the details.

This site (and me, coincidentally) are part of TEAM ORANGE. 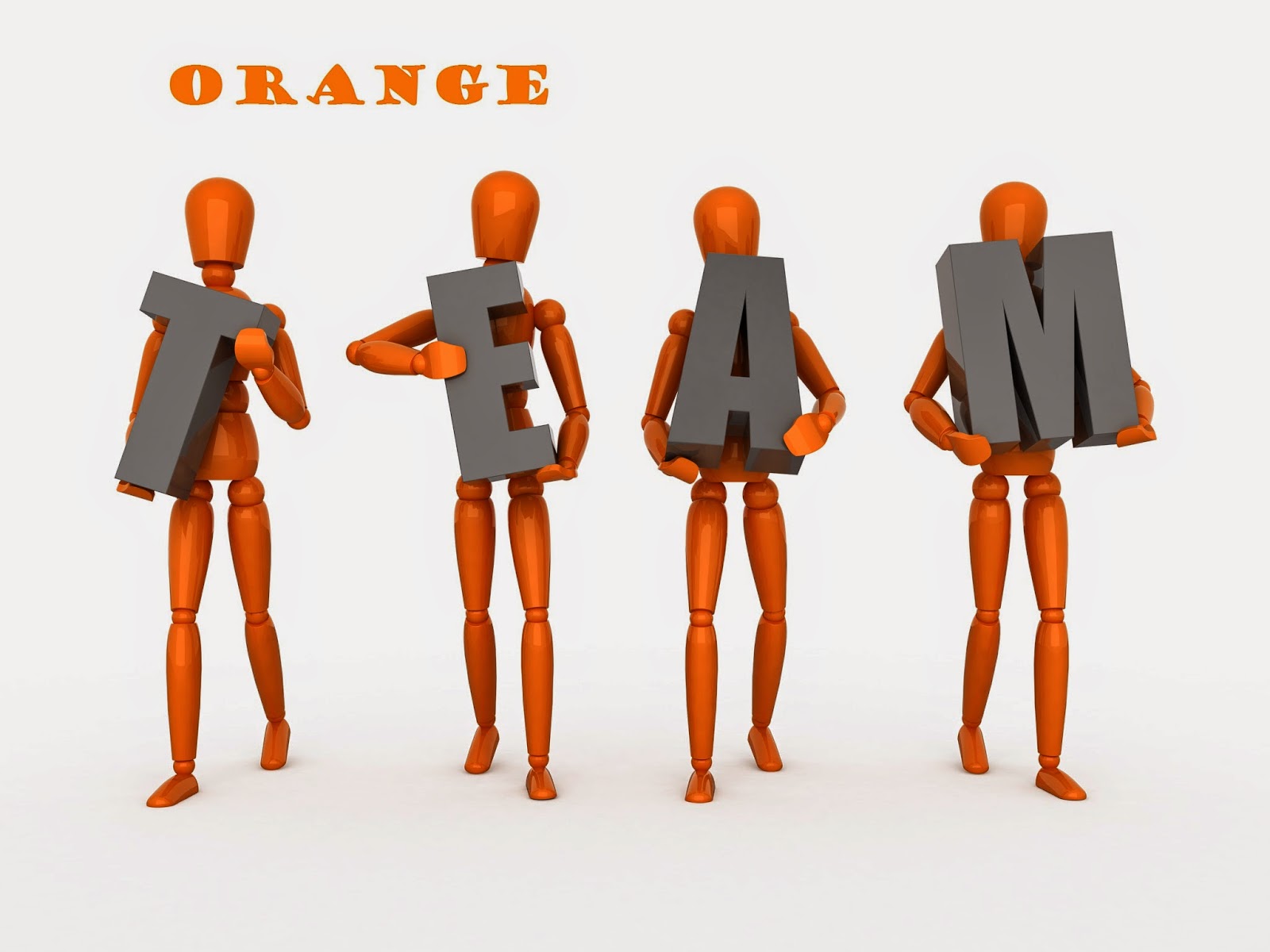 If you'd like to find out more about the hunt, see links to all the authors participating, and see the full list of prizes up for grabs, go to the YA Scavenger Hunt page.

Directions: Below, you'll notice that I've listed my favorite number. Collect the favorite numbers of all the authors on the ORANGE TEAM, and then add them up (don't worry, you can use a calculator!).

Entry Form: Once you've added up all the numbers, make sure you fill out the form here to officially qualify for the grand prize. Only entries that have the correct number will qualify.

Rules: Open internationally, anyone below the age of 18 should have a parent or guardian's permission to enter. To be eligible for the grand prize, you must submit the completed entry form by Sunday October 5th, at noon Pacific Time. Entries sent without the correct number or without contact information will not be considered. 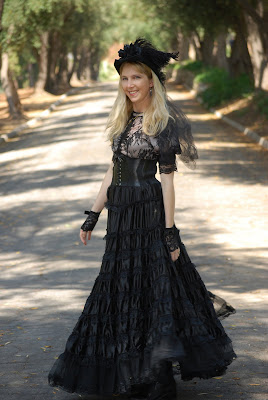 Today, I am hosting Suzanne Lazear on my website for the YA Scavenger Hunt! Suzanne Lazear is the author of the YA fairytale steampunk series The Aether Chronicles. INNOCENT DARKNESS and CHARMED VENGEANCE are FRAGILE DESTINY. Suzanne lives in Southern California with her daughter and the hubby where she’s currently attempting to make a raygun to match her ballgown. She’s also part of the Steampunk group blog Steamed http://wwww.ageofsteam.wordpress.com Learn more about the Aether Chronicles at http://www.aetherchronicles.com 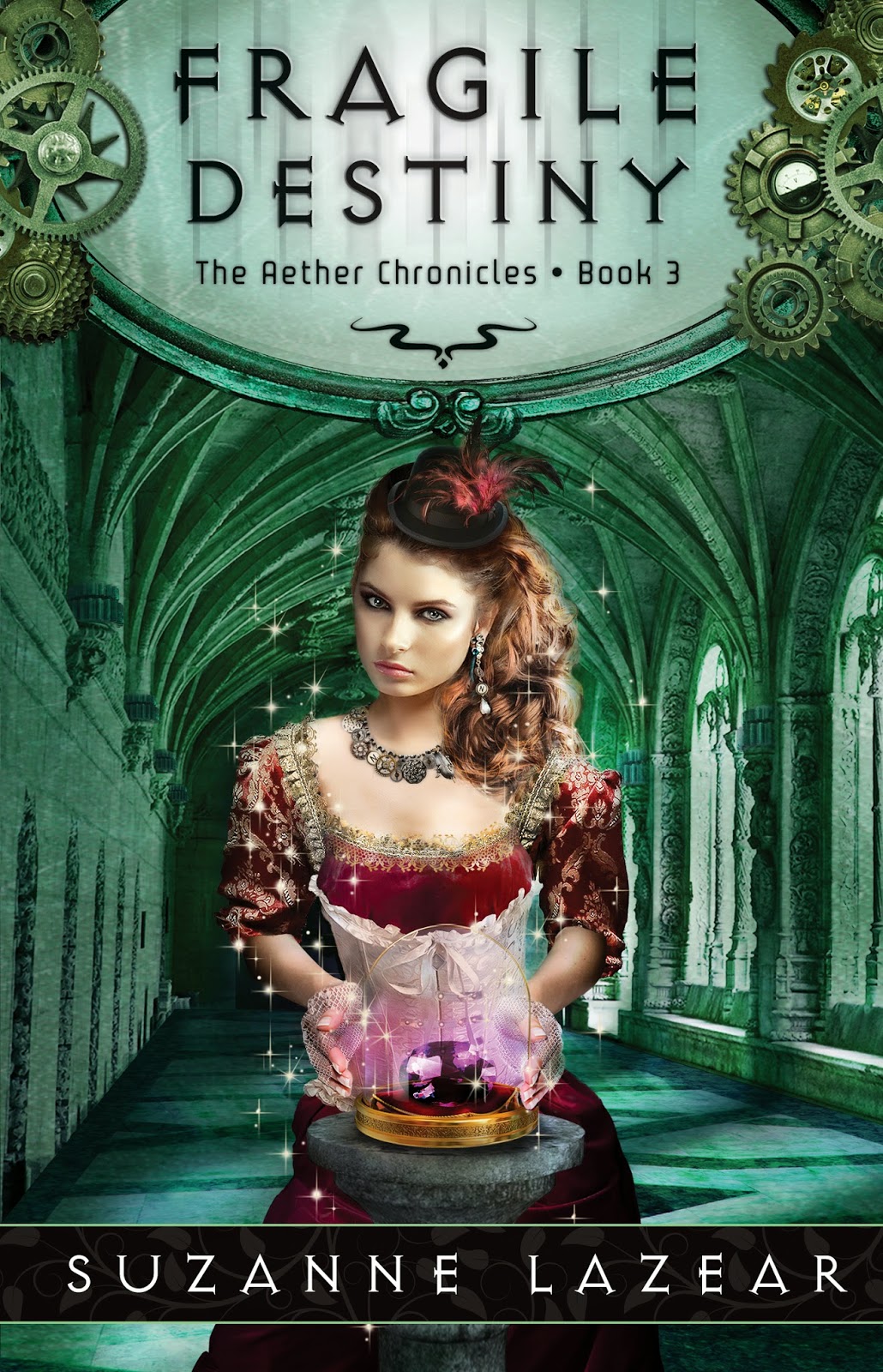 Noli and her true love V fear the worst if the Staff of Eris—a potent Otherworld relic—falls into the wrong hands. Broken into pieces and hidden in the mortal realm long ago, the staff bestows vast powers on whoever possesses it. Ciarán, the dark king, is trying to rebuild the staff, intending to use it to install a new queen.

In a desperate effort to keep the Otherworld from falling into darkness, Noli and V plot the daring theft of a jewel Ciarán needs to complete the staff. But Ciarán is not so easily defeated. Through his devious machinations, he has set a plan in motion for a final showdown that will decide who rules the Otherworld once and for all.

~Cut Scene from FRAGILE DESTINY~
Author’s Note: Originally, I had Noli herself deliver the letter she asked Aodhan to write in chapter Twenty Six. Even though I really liked the interaction between Noli and the Dark
King, and the appearance of Aire, this scene was ultimately cut because everything in it could be accomplished in a quicker, briefer fashion.

And don't forget to enter the contest for a chance to win a ton of signed books by me, Suzanne Lazear, and more! To enter, you need to know that I turned SEVENTEEN the summer after my junior year. Add up all the favorite numbers of the authors on the orange team and you'll have all the secret code to enter for the grand prize!

To keep going on your quest for the hunt, you need to check out the next author! Visit Adi Rule's site, HERE!