There's been lots of discussion on the Internet lately about blogs and the risk of using photos pulled from the web and copyright issues. Google Chrome has an advanced Images search option that helps you narrow down photos by usage rights. What follows is a simple tutorial.

Step one: Search Google Images for something. I typed in Taco Stand.

Then I scroll over to the right to this row of buttons:

Click on the gear on the far right and you get these choices: 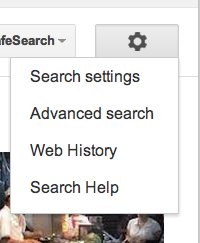 Click on Advanced Search - you'll go to this page:

Scroll down the page and you'll see these options: 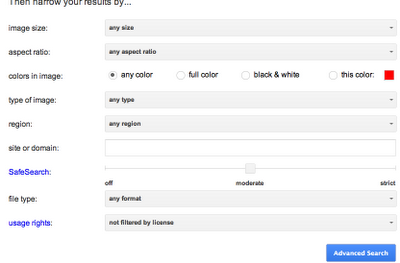 Click on the bottom choice, Usage Rights and you'll get these options:

Since my site is not a commercial site (nothing for sale), I click on free to use or share. If you want to change the photo, click on free to use share or modify. Here are the results for Taco Stand after my search. I can feel confident using any of these photos on my blog. 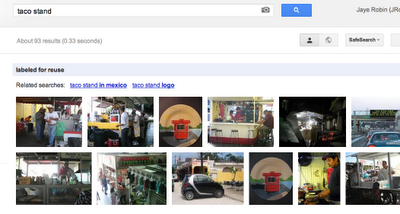 I hope this helps - sometimes the photos are limited or weirdly related to your search, but it is a really helpful tool and for me, sometimes easier than going to a stock photo site.

Email ThisBlogThis!Share to TwitterShare to FacebookShare to Pinterest
Labels: blogs

Signs You Just Might be Living in the Country

Yesterday, driving home from teaching camp, I came up around the curve of my long crooked road and saw a little cardboard sign. "Lemonade. 25 cents". 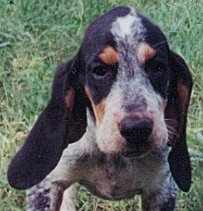 At the end of a gravel drive was a tow-headed boy, probably about seven, sitting in a webbed lawn chair, barefooted and shirtless, with a blue tick hound puppy in his lap. Her name was Daisy. Have you ever seen such cuteness? Of course I stopped and got some of the bitterest lemonade ever, but I got to pet the puppy and that was worth way more than a quarter.

Later that night, sitting out on the front porch listening to the peepers sing, my neighbor stopped over dragging her new boyfriend or boy friend, which I'm not sure. But said fellow had mixed up a lethal concoction of maraschino cherry juice and moonshine in a styrofoam cup loaded with ice. "Here try a sip and be sure and eat one of 'em cherries." Whoohee! 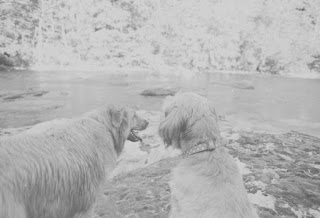 Today our riding around in the car we got stopped by a coal train, winked at by deer, drove past a lazy river filled with folks on intertubes out a-loafing and waved at all the neighbors. Once home we found our nearest neighbor had brought our mail down from the hard road and left it on the porch along with some cucumbers.


That's how my weekend's shaping up. How 'bout yours?

And Some Days You Can't Write A Thing

I'm having one of those days. Had to reverse yesterday's word count because I'd put the best friend in a car wreck, which was not going to help the future plot, but now it's like, CRAP, what next?

Plus last night was my writer's group and though they had GREAT things to say about my pages, Joy, my editor friend, always asks such insightful questions that I end up having to simply THINK about motivation and what is the real story behind these people that appeared in my head. And maybe I need to reel it in for a day or two and do some free writing about the Mom to figure out more of why she's drinking too much wine and more of why Dad is just going deeper into himself. But I'm so freaking goal oriented that I (hides head in embarrassment) keep an index card with daily word count goals on my desk next to my laptop. Oh yeah. I'm one of those. List-maker extraordinaire.

Plus - I'm querying and waiting and people are digging my query but now I'm waiting and stalking and every negative tweet, every positive tweet, every completely absent tweet has the brain monkeys chattering like it's party time in the forest. This is NOT PRODUCTIVE. Do NOT follow my example on this. 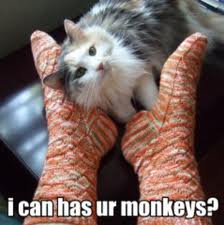 Luckily my afternoons this week are filled with making cool batik art at a camp I'm teaching to tweens and teens, most of whom are past and present students, which is allowing me to get my head wrapped back around RETURNING to the classroom next Wednesday and the kids returning the following Tuesday. Yes, we start early because we build in for mountain snow days.

So there's a rambling hump day post for you. How's your week shaping up?
Posted by Jaye Robin Brown at 9:47 AM 21 comments:

Email ThisBlogThis!Share to TwitterShare to FacebookShare to Pinterest
Labels: writing

Be sure and hop over to the Mixed Up Files of Middle-Grade Readers and see my post:
Horses, Hearts, and Healing--Stand-Alone Middle Grade Horse Books That Leave You Smiling or Crying

And here's a picture of my gelding, Druid, aka "Little Man" as a baby and his buddy, Bosco, for your  Wednesday smile. 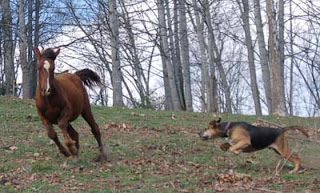 Email ThisBlogThis!Share to TwitterShare to FacebookShare to Pinterest
Labels: Mixed Up Files

Several fabulous bloggers have bequeathed awards to me over the past month or two and I've had a hard time getting to them. 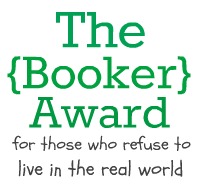 
I pass this award on to Ms. Tracy Brown at Write On!

The next award I received was from Jaycee De Lorenzo at her blog. The Leibster Award!
Anyway, y'all know how I feel about rules, but here they are:
The Rules...
2. Answer 10 questions the tagger has given you and give 10 questions to the people you've tagged.
(Okay, so there were really five rules, but since I'm cheating this is the only part I'm doing and since I've gotten this a few times - I'm only going to tag none of you - if you want to answer the questions - you're tagged!)

1.  Are you a dog or cat person?  Both, but probably more dog than cat
2.  An asteroid is headed to Earth.  It's going to strike in 24 hours, and there's no Bruce Willis and his oil crew to save the day.  How do you spend your last day?

Writing an end-times poem and sending it down river in a glass bottle. Drinking bourbon. Letting my horses run wild and crazy all over my neighbor's big hayfield. Feeding my dogs from plates. Sardines for the cats. Hugging. Kissing. Laughing. Crying. Bonfires. Fireworks. More Bourbon.
3.  What's your favorite scent? My horses.
4.  Spiders or rattlesnakes - which one is scarier? Rattlesnakes - no contest.
5.  Worst movie you've ever seen that you still kinda love. Okay, huge Austin Powers fan here
6.  Do you believe in Aliens? Sure, why not. Seems kind of egotistical not to.
7.  Name one blog you consider a must-read? VeronicaSicoe.com
8.  Book you're really looking forward to coming out? The last of Beth Revis' Space trilogy
9.  Favorite fictional character of all time? Bonanza Jellybean
10.  The top item on your bucket list?  I'd really love to see Machu Picchu 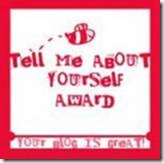 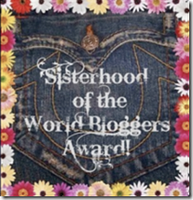 The next awards came from Katrina DeLallo at her blog, The World Crafter. The Tell Me About Yourself Award and The Sisterhood of World Bloggers Award ask that I answer seven questions about myself that you might not know. So, I'm going to dig deep.
I'm supposed to tag y'all. I don't know how many. You want to be tagged? You're it. Tell me more about you! Dig deep.

A while back, I interviewed Marie Lamba at the release of her young adult paranormal romance, DRAWN. You can read that interview here.

Today through Friday, she's giving away her book for FREE! Click on the image below for the link.

She's the artist that finds him in her drawings. He's the medieval ghost that conquers her heart. And their time is running out.
Michelle De Freccio moves to England seeking a normal life, but someone starts appearing in her sketches. Then he grabs her at the castle, his pale green eyes full of longing. She's immediately drawn to him, but is Christopher Newman real? She's either losing it, or channeling a hot ghost from the 1400's. History calls him a murderer. Her heart tells her other truths. Now Michelle faces endless dangers...and a timeless love.

This blog post is courtesy of Veronica Sicoe who graciously gave me a list of topics for when my brain is in freeze mode. You can find Vero at her blog, Veronicasicoe.com and on Twitter @veronicasicoe

Villains. The characters we hate to love. The bad guys. The antagonists.

For me, villains fall into two categories. True evil and people we love who are acting like idiots.
In CAST IN GOLD, my villain is rich girl, Tinker. Hot, gorgeous (sort of like Maria Sharapova), but wounded. Her wicked ways are not her fault. She's just had to walk in some ouchy shoes. She wants to be my MC, Sadie's, girlfriend, but her background makes it tough. She's expected to be flawless perfection and gay doesn't fall into that category. At least not in her mind. Tinker falls into the category of people we love who act like idiots.

In MARKS OF A HORSEKEEPER, there are two villains, but we'll focus on Ocho, ruler of the Riff mine. Henry the VIII was my inspiration. As a young girl, growing up in the Episcopal church, I was fascinated by King Henry. Who was this man that could single-handedly throw off the Catholic church because he wanted a new wife, cuter, younger, more capable of producing an heir? And let's talk about Anne Boleyn. I think studying Henry VIII gave me my first view at the disposable nature in which some men view women. Misogyny at its finest. Even in elementary school I understood both the fundamental wrongness of this and the inherent fear that comes with being part of a physically weaker sex. So my villain, Ocho, is a misogynist with rules. He doesn't allow his betrothed girls to marry until they're eighteen. But love, forget it. And value - he only assigns that if Roan, my MC, does what he says. 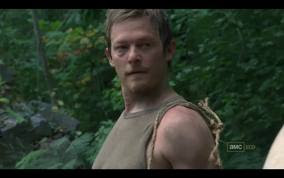 In SING TO THE WIND, my villain is Sammy. He's basically every Southern backwoods redneck I've ever met in my life. (And being from Alabama, I represent, yo.) Small-minded, out for himself, devious, flawed. I needed to struggle to give him any redeeming quality but my CP insisted, so I let him put up with his wife, Whitney's, foster animal addiction. Sammy's a drug-dealer with a teenage bride and a toddler son. But it is all about him and he's not about to let you forget it.

So, what about you? Where do you find your villains?

Email ThisBlogThis!Share to TwitterShare to FacebookShare to Pinterest
Labels: villains

There were a whole bunch of shenanigans happening over on Verla Kay's Blue Boards in the last twenty four hours. One regular challenged us to write limericks for the trench, prizes to be awarded a hairball hacking zombie cat. I liked mine so much, I'm reposting here. Feel free to add your own in the comments!


There once were some writers who waited
They would say, "No, our breath, it's not bated."
"We're patient. We're cool."
"No, I swear that's not drool."
But the refresh button felt rather frustrated.