Appalachian Engineering can often be a matter of finding what's at hand out on the farm. It's a long drive to town and the hardware store, so many residents have perfected the technique of "Oh, let's just put a big rock on it."

Such was the case in our house when we first moved in. Under the kitchen sink was a hole. This hole was mostly covered by a big rock. Note use of the word mostly. 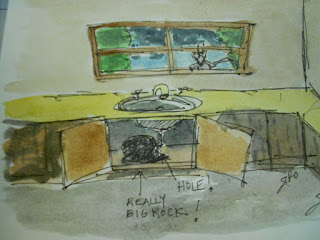 A little further explanation of the old kitchen (now remodeled without really big rock or hole) - the cabinets were a U-shaped configuration, but between them were no barriers, so behind the cabinet doors it was just one long continuous space. Enter the demon opossum.

I'm in the back when I hear a blood-curdling scream. I run to the kitchen. My significant other is babbling incoherently and pointing at the silverware drawer (which is shut). Tentatively, I reach forward and pull it open (cue sinister music), when: 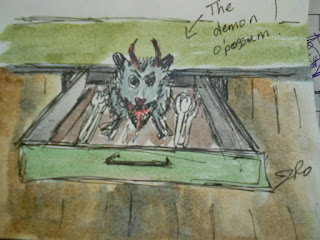 Two of us were then screaming incoherently and babbling at the silverware drawer. The demon opossum took one look and hightailed back around the cabinet U and out of the hole through which he came.

Moral of the story: Make sure you get a big enough rock for the job!

Any close calls with wildlife in your house?

Posted by Jaye Robin Brown at 1:00 AM