A-Z Challenge - L is for Least'uns, Loafin', and Loafer's Glory 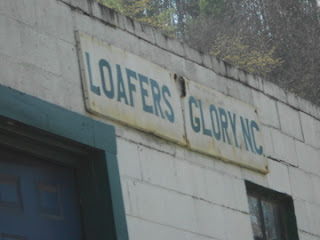 What I would give to be able to loaf my days away. Loafers Glory would be a good place to do it. Pretty scenery, a mountain river, the gentle chunk-a-chunk of the passing coal train.

You say you're not familiar with the term loafin'?  Well, this falls back to those Scotch-Irish roots of the Appalachian mountains and a language steeped in Old English and Southern vernacular. If you're just chilling out, relaxing, not working hard like you're supposed to, you're loafin'. Mountain folks are hard-working people. So when you ask someone what they're doing and they answer, "Why I ain't doing much but loafin'." It's usually said with a wry smile and a wink.

Where's your favorite place to loaf? And are  you the least'in in your family?