A-Z Challenge - I is for Initials, Scotch-Irish, and Iris Dement

The Appalachian mountains were settled mostly by the Scotch-Irish. This term is a totally American confection because most of the immigrants were not from Scotland. They were Protestants transplanted from England and Wales to the Ulster plantation in Ireland during the 17th century. When they immigrated to America in the colonial era, many made their way inland from the coast to Appalachia. It was during the surge of Irish immigration after the Irish Famine in the 1840's that the earlier immigrants took to calling themselves Scotch-Irish (to distinguish themselves from the newer arrivals.) People around here still call themselves Scotch-Irish.

But rather than argue semantics, let's talk about what they did bring. Music and language. Old ballads and old English still find their way into the local dialect. (See the letter "H"). One of the stories I love is that a prayer said under a beech tree goes straight to God. We have an enormous beech tree on our property. 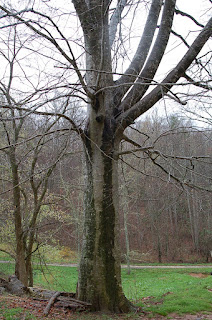 And on it are a pair of carved initials. The letters are so worn they're not distinguishable anymore. I often wonder, did these lovers say a prayer under the tree to make their relationship last? 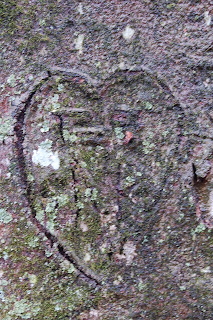 A great movie about the tradition of music in the Appalachian Mountains is Songcatcher, a drama about a musicologist sent to record the old ballads. The soundtrack of this movie is incredible. In the spirit of the Scotch-Irish sent journeying from their homes I give you one of my favorites, Pretty Saro, as sung by Iris Dement. Enjoy!
http://www.youtube.com/watch?v=A6ArylRGWME
(Unfortunately Youtube wouldn't let me imbed this one - but it's worth the watch, such a beautiful song)

So tell me a story about the initials above, what do you think they say?