A-Z Challenge - E is for Eggs (Fresh from the Farm)


Okay. True story of a couple of city folk. Not long after moving here my significant other asked me, "Do you need a rooster to have chicken eggs?"

So we bought our first batch of chicks from the feed store and lo and behold, even though it was supposedly a straight run of chicks (all sexed as hens) who ended up with the cutest little banty rooster named Boots. Poor handsome Boots fell victim to a fox (we think) and now we're down to just five hens.  Three Rhode Island Red/Buff Orphington crosses, one Dominickeer, and one Barred Partridge. They're good girls and even though two are getting up in hen years, we still get fresh eggs. Once you've experienced backyard eggs, you'll never want to go back. (Though sometimes in the winter, we're forced to when the girls are just too dang cold to lay) 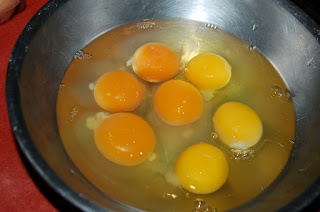 So, here's your question. The above bowl contains fresh from the hen house eggs and grocery store organic/free range eggs. Which are which?