As a young adult writer, the foundation for most of my writing starts with my own teenage experience.  Times, fashion and music have changed but that overall quest-for-self is still the same.  So in that spirt, I share these bi-monthly interviews:  Memories of High School You.  If you're interested in participating just drop me a line in the comments.


This week I'm so pleased to introduce Denise Jaden. Denise is not only on Verla Kay's Blue Boards, but is the mastermind behind our #wipmadness hashtag and March Madness which is happening NOW on her blog and others (including this one). So, it seemed entirely appropriate that for mid-March we learn a bit about the high school Denise. 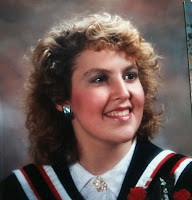 Tell us about your high school, public or private, size, demographic, location?
I was born and raised in the same town of Abbotsford, 125,000-ish population, about an hour out from Vancouver, Canada. I went to a pretty huge public high school – there were 560 in my grad class.
Were there cliques at your high school?  What were they?  Who did you hang with?
Cliques weren’t as big in my high school as they seem to be today. There were the jocks and cheerleaders, of course, but it’s not like they shunned the rest of the student body. I was heavily involved with the theatre group at our school, participating with all the plays and a new group we created called Mimenastics.
Did you have a memorable teacher?  Good or bad?  How did they influence you?
Yes, my drama teacher was my FAVORITE! He was very even-keel and encouraging during the tumultuous world of teen-dom. I hear he’s retiring this year. Maybe I’ll drop off a book… (I bet he would LOVE to see you!)
Did you have an inkling as a teenager that you would become a writer?
Oh goodness no. In high school I did everything I could to avoid reading and writing.
What book had the biggest impact on you as a high school student?  How?
As I said above, I tried to avoid reading at all costs. I remember watching the movie of The Outsiders to get out of reading the book – that’s how serious I was about my anti-reading agenda. (That is such a cool story, and probably a real inspiration to the students you talk to at school visits)
What band could you not get enough of in high school?  Were you an album or a CD kid?  Cover art you remember?
I’ve always had eclectic music tastes. In high school I loved Van Halen and Michael Jackson, among many others. Definitely an album/cassette girl. (There's a Christmas photo of me somewhere smiling broadly with a Van Halen album in my hand)
What was the fashion rage - the one article of clothing you either got, or didn’t get that rocked your world?
Loved my jeans. And I really liked half-tops (I know, I know). You might have found me in a pair of leg warmers once or twice, but other than that, I wasn’t a big follower of trends.
What hobbies, activities, sports were you involved in that influence your writing today?
I’ve been a dancer since I was barely walking, mostly Polynesian dance, and now I’ve been teaching and performing professionally for several years. I keep thinking about writing a book about a dancer, but it hasn’t come to pass yet.
Good kid or wild child or a little of both?  Details? (Mwaahaa)
A bit of both. I did a pretty good job of playing the part of the good kid, but I was drinking and smoking and getting into mischief at a fairly early age.
Did you have a favorite phrase or slang word?
No way!
Who was your bestie?  Your frenemy?  Your sworn enemy?  Did you ever have one that switched to another?  Why?
My best friend was a girl named Melanie, whom I’d known since I was a baby. I still see her regularly (she takes Polynesian dance classes). Frenemy…I’m not sure exactly what that is, but I’d have to say my friend Steven. He was fun and hilarious, but he tended turn on people easily. (Never, thankfully, on me.) I’ve never really had a sworn enemy, thank heavens. I can only handle conflict in my fiction!
If you could say one thing to your high school you, what would you say?
Relax! Nobody spends nearly as much time thinking about you as you may imagine.
How do we find you now?
My website at http://www.denisejaden.com
I’m also on Facebook, LinkedIn, Tumbler, all under Denise Jaden, but you’ll probably find me most often on Twitter, where I love to hang out and procrastinate—I mean chat!
Thanks Jaye! (Thanks for stopping by!)

Email ThisBlogThis!Share to TwitterShare to FacebookShare to Pinterest
Labels: Denise Jaden, Memories of High School You