As a young adult writer, the foundation for most of my writing starts with my own teenage experience.  Times, fashion and music have changed but that overall quest-for-self is still the same.  So in that spirt, I share these bi-monthly interviews:  Memories of High School You.  Fellow MG and YA authors will share their own spin on the hallowed halls.  If you're interested in participating just drop me a line in the comments.


This week, may I introduce Margo Sorenson, a fellow Verla Kay blueboarder and author of the books, Ambrose and the Princess, Ambrose and the Cathedral Dream, and her darling new picture book, Aloha for Carol Ann. 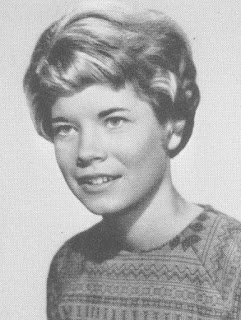 Tell us about your high school, public or private, size, demographic, location?
It was a public high school, multicultural and multi-ethnic, located in an old suburb of L.A., and my graduating class was so huge --  985 – that we had to graduate in the Rose Bowl!  Wow! My high school where I teach only has 500 students total!

Were there cliques at your high school?  What were they?  Who did you hang with?
There were cliques, just like every other high school in America!  I tried to hang with the popular kids, the cheerleaders and athletes and the student government types, but, because I was a not-so secret nerd, it didn’t always work out.   Basically, I tried to get along with everybody and gravitated to the “nice” kids.  In ALOHA FOR CAROL ANN, my most recent children’s picture book, her new classmates help Carol Ann feel at home in Hawaii, which, to Carol Ann, is a very strange and different place.  That was what my friends and I tried to do back then, make new kids feel welcome, because I knew what it was like to be the “new kid,” as many of us do.

Did you have a memorable teacher?  Good or bad?  How did they influence you?  I had a memorable teacher (in a bad way) who thought the way to teach Walden’s Pond was to test us on questions such as “How long was Walden’s Pond,” and that pretty much ruined literature for me that year, but it gave me a blueprint for how NOT to teach literature myself when I taught high school, years later!  A good memorable teacher was my classics teacher, who made literature come alive – Shakespeare, Plato, and Homer.  Sitting in class, discussing what we were reading, we all felt strong emotions through identifying with the characters, and that’s what I try to do (note emphasis on “try”!) in my writing.  I love those dynamic conversations between teens as they are formulating their ideas about life.

Did you have an inkling as a teenager that you would become a writer?  No, in fact, I was told by some of my teachers that I was a so-so writer (never an A in creative writing), so I concentrated on reading books and on writing reports (like on the California Legislature – fascinating topic – not!), instead.  I can still remember some of the painful comments made on my stories, so, teachers, please be careful with those red pens!

What book had the biggest impact on you as a high school student?  How?  This is how geeky I was – any history book I read had an impact on me, especially medieval history.  But, Shakespeare’s Othello was amazing and I loved Arthur Miller’s plays, like The Crucible.  My love for medieval history is partly why I wrote the Ambrose the Mouse books, with Ambrose the medieval mouse as the star.  Some of my other books for readers 9-14 have a medieval or classical setting, such as TIME OF HONOR, my forthcoming middle grade e-book being published in October 2012 by Canadian publisher Muse Publishing, though most are set in contemporary times.

What band could you not get enough of in high school?  Were you an album or a CD kid?  Cover art you remember?  The Beach Boys were the best!  We had 45’s and albums – there weren’t even eight-tracks, yet.   (Yes, I’m a dinosaur!)  I’ll never forget doing the Surfers’ Stomp at the Beach Boys concert at the Pasadena Civic Auditorium and playing my portable radio at the beach in Newport, with the Beach Boys’ music blaring through the air, while my friends and I checked out the cute guys and slathered baby oil all over us (oh, yes, those were the days we knew nothing!)...  And lemon juice in the hair, I bet!

What was the fashion rage - the one article of clothing you either got, or didn’t get that rocked your world?  Shirtwaist dresses were it – and little flats – and plaid wool skirts with matching sweaters.  We all looked alike, but, I guess that was the point!  When I was younger, we wore starched petticoats under our dresses; I remember starching mine and putting them on an umbrella to dry!  We looked like little lampshades.  Luckily, that fad went away by the time we were in junior high.

What hobbies, activities, sports were you involved in that influence your writing today?  There were no sports for girls, per se, back in the Dark Ages, but one of my and my friends’ hobbies was to tell our parents we were going to the library to study and then we’d cruise Bob’s Big Boy on Colorado Blvd, looking for cute guys.  The fun – and scariness -- of breaking the rules is something that has influenced my writing, whether it’s in the plot, or in the characters’ secret wishes.  In DANGER CANYON, the two boys go off the hiking trail (as we’ve all been told we should not!) and end up being threatened by prison escapees, a mountain lion, and the unforgiving terrain as darkness begins to fall.  That actually happened to me and my friends – well, truthfully, there were no prison escapees!  Although I don’t have the singing voice I wished I did (my sister got it!), I loved to sing, and I sang in the adult choir at our church and went to the church summer music, art, and drama camps, which were, of course, always the settings for more escapades.  Naturally, these have found their ways into my books, as in my to-be-published middle grade e-book ISLAND DANGER (Muse Publishing), in which Todd explores the forbidden ravine in Hawaii to find the hidden weapons, even though he’s been warned there are booby-trapped explosives and armed men guarding their pakalolo crops.  Not that I did exactly that at camp, but, you know!

Good kid or wild child or a little of both?  Details? (Mwaahaa)  Well, I guess you already know that from my previous answer.  My problem was that I wasn’t crafty or sneaky enough, so I’d usually get caught.  Case in point:  the very first day I got my driver’s license, I pulled the stunt above, going to Bob’s Big Boy with my friends, and I was driving my friends down the alley behind Bob’s, twenty miles above the speed limit – and, to add to the fun --  going the wrong way.  I’ve always been spatially-challenged!  Whoops!  There was a nice, but stern, police officer at the end of the alley who showed me the error of my ways by giving me a ticket.  The evidence for  my parents was incontrovertible – I was so NOT at the library!  Consequently, I was – at least most of the time – a pretty good kid.

Did you have a favorite phrase or slang word?
“That is so bitchen’” – I blush to even type the words!

Who was your bestie?  Your frenemy?  Your sworn enemy?  Did you ever have one that switched to another?  Why?  I had a group of besties, not one single person.  I didn’t have any sworn enemies or frenemies; I was too milktoast and trying to be too nice for that!  The only thing that really got me annoyed was when I saw someone being treated unjustly.  For some reason, that would set me off and then “nice” went out the window.   The characters in my books often do the same thing, as in THE GOTCHA PLOT, where two middle school kids get revenge on the school bully with some cleaning fluid they find in the janitor’s closet that makes them invisible.  That was fun to write.

If you could say one thing to your high school you, what would you say?
Don’t worry; it’ll all turn out all right, and high school isn’t like real life when you grow up!

How do we find you now?
Physically, I’m in Southern California, writing, reading (still!), traveling, and visiting grandkids, and virtually, you can find me at www.margosorenson.com

Thanks, Jaye, for inviting me to interview!  Thanks for stopping by and playing along!

Posted by Jaye Robin Brown at 9:38 AM

Email ThisBlogThis!Share to TwitterShare to FacebookShare to Pinterest
Labels: Margo Sorenson, Memories of High School You